By the old canal 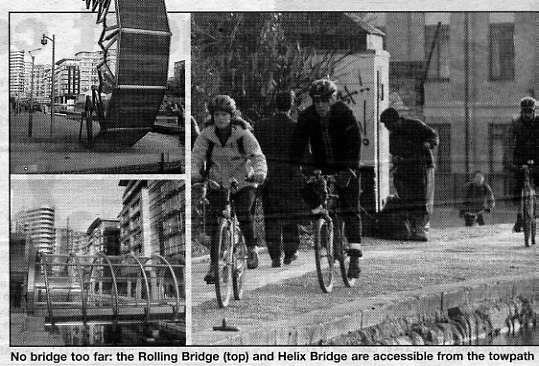 Why bother with the hassle of taking the Tube to visit just one London attraction when an autumn afternoon's pedal along the Regent's Canal can have you exploring many? The Rolling Bridge is just one of the architectural splendours on display in the redeveloped Paddington Basin As it sits above the lapping water, its reflection unfurls into the sky and shimmers on the canal waters. The man behind the structure is Thomas Heatherwick, a designer-cum-engineer, who attended its opening less than a month ago.


Roll up, roll up
'The best experiences are when you are doing things for the public,' Heatherwick says. Indeed, a visit to the Rolling Bridge makes a fine day out for the pedalling public.
Made of timber and steel with hydraulic joints, the 12-metre structure metamorphosis from a flat walkway for pedestrians, to a curled-up hedgehog shape, on the canal-side to let passing boats through. 'When it rolls up, it is truly beautiful,' says Ed Fox, communications manager of British Waterways.
'We have hundreds of bridges along the canals but none are like this. If you think of nearby Little Venice as a quaint 19th century space, going to Paddington Basin is like being hurled into the Millennium,' he says.
Heatherwick's construction is the show-stopper here but, at the south end of the waterscape, a large glass tube called the Helix Bridge, which retracts like a giant corkscrew to let boats through, is also a futuristic sight. The shimmering oasis is now open to the public but, Fox says, people can't ride within the basin; they need; to lock up their bikes nearby. It can be reached off-road from Regent's "Park. Hop on to the-canal, head west and the basin is on your left before Little Venice. Take a map and follow canal bicycle instructions.

A short ride from the sci-fi-esque basin lies the shrouded woodland of Hampstead Heath, an October must-see for its rusty milieu. Ride off the canal at the Regent's Park/London Zoo exit and pedal north past scenic Primrose Hill and beyond. The Heath covers 320 hectares and has some 25 ponds, as well as areas of ancient woodland, bog, hedgerows and grassland. If you like fresh foods, plenty of mushrooms are growing wild on the heath. Take a notepad, mushroom guide and get picking (for guided walks, visit www.fungitobewith.org).
Also within the grounds is the neoclassical Kenwood House -it puts Buck Palace's concrete facade to shame. Works by Rembrandt, Turner and Vermeer hang against a backdrop of sumptuous rooms. And a bonus is that it's free.

Down on the farm

The next gem is farther east and just off the Regent's Canal. It's a common joke commuters don't know a hen from a cockerel but along Hackney Road [get off the canal at Broadway Market] lies the East End's most picturesque city farm. There you can coo at horses, bantam hens and sheep. The menagerie could rival that of any country farm, so cityphiles need never leave, London again. Fresh eggs are for sale and the understated caffé offers feasts such as an organic cooked breakfast and tea and toast - a perfect reward after a long cycle.

The above route runs from Paddington to Shoreditch or vice versa. For those who need a helping hand, bikes are allowed on Tubes in areas of the Circle, District, Hammersmith & City and East London lines from New Cross. Likewise, there are overland trains to Waterloo and Victoria, both of which are near to Regent Park and the canal. The ride is easy for beginners as it crosses few roads. See http://tube.tfl.gov.uk/content/faq/bicycle.asp.
For more information on canal riding, visit www.waterscape.com
For other city farms to cycle in your area, visit www.farmgarden.org.uk

A stone’s throw from the belching King's Cross train station is Camley Street’s 1 hectare green space. Simply pedal en route along the Regent's Canal towpath from Islington to Camden and get off at King's Cross. The tranquil space has a fine sighting record of birds. Butterflies and frogs flourish in its pond, meadow and woodland, Views of the canal and passing narrow boats are offset romantically by relics of Victorian industry.
Camley Street Natural park, 12 Camley Street, open weekends from 11am to 5pm. Tel: 020 7833 2311.

From Greenwich, pedal along the Thames Path and at the Barrier head south along the Green Chain route. Maryon Park's highest point, Cox's Mount, is an old Roman hill fort used in the 1850s to adjust navy compasses. Beyond, at Maryon Wilson Park, lies the Hanging Wood. Originally a hideaway for the highwaymen of Shooters Hill and Blackheath, it now boasts a deer park and a farm. Charlton village is not far on and Oxleas ancient woodland is just beyond.